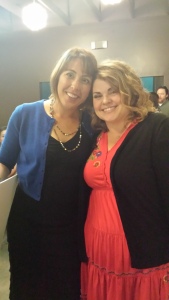 Christina Hobbs and Lauren Billings call themselves “brain-twins.” When you consider they’re collaborative accomplishments, it’s easy to understand why. Under the pen name, Christina Lauren, they’ve written ten New York Times bestselling novels, had their books translated into 29 languages, and scored a movie deal for their smash hit, Beautiful Bastard. Last week, they were in town for Comic-Con, and I had the pleasure of attending their happy hour event at Eclipse Chocolate Bar, where they shared cheese, chocolate, and chit-chat with their adoring fans.

San Diego holds a special place in Christina and Lauren’s hearts: it was here that they met in person for the first time, six years ago. (If you’ve ever wondered why our city is used as a backdrop in some of their stories, that’s why!) Back then, they attended Comic-Con together as enthusiasts; fast forward to Comic-Con 2015, and they were guest speakers on a panel about the evolution of fan fiction – a topic they’re quite versed in, considering they got their start as writers in the world of Twilight and Hunger Games fanfic.

I was curious about their writing process – how do two different people living in two different states (Christina hails from Utah, while Lauren calls Orange County home) work together to develop a cohesive novel (or twelve), even if they are self-proclaimed “brain-twins?” Answer: by plotting ahead of time, and splitting up the POVs. 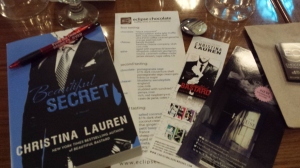 Even so, they said they each approach their writing a little differently. For example, Lauren said the steamy scenes are the easiest for her to write, all in one fell swoop – while Christina is a “tinkerer” who’ll fiddle with her scenes for as long as she possibly can. They both agreed, however, that their favorite books are the ones where, at the end, they felt they grew as writers – the ones that took them on a journey, and improved their craft.

Christina and Lauren are as funny and charming in person as they are in their writing, and it was a pleasure to spend time talking with them. Next up, they’ll be signing at RWA 2015. If you’re in New York, stop by their booth and say hi!