Documentarian Laurie Kahn says that she’s always been interested in the work women do. So it makes sense that she decided to spend five years investigating the romance fiction industry, a female-powered, billion-dollar-a-year business that “no one takes seriously.” The result of her research – which included speaking to dozens of readers, writers, and scholars, as well as reading hundreds of romance novels herself – is the feature-length documentary film, Love Between the Covers. On June 14th, several RWASD chapter members trekked north to the LA Film Festival to catch the U.S. premiere. The film reaffirmed what we already knew: romance novels are powerful, and so are the people who write them. 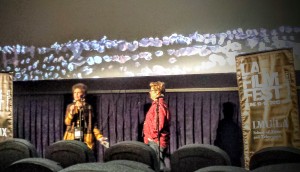 Laurie Kahn answering questions from the audience after the U.S. premiere of “Love Between the Covers.”

Love Between the Covers highlights what makes the genre such an unstoppable force in the publishing industry. What are often referred to as “trashy books” are actually the “ones who keep the lights on” for the rest of popular fiction. Romance readers number in the millions, many of whom devour their books voraciously, and are always hungry for the next story. And it’s no wonder they can’t stop reading them: who doesn’t like to chase the promise of a “happily ever after?”

Beyond that, romance novels have the power to unify readers and writers, by showing that the desire for a happy ending transcends time, class, race, gender, and ability. The film featured interviews with genre pioneers such as Radclyffe, founder of the LGBTQ publishing house, Bold Strokes Books, and Beverly Jenkins, one of the leading authors of African-American historical romance. Their award-winning novels have touched the lives of their readers, and continue to contribute to what Eloisa James describes as “one of the very few meritocracies left.” Every romance reader can become a writer, regardless of their background. And one of the biggest reasons for this meritocracy is the existence of RWA.

Laurie Kahn attended her first RWA conference in 2009. There, she discovered the same welcoming, pay-it-forward attitude that we share as current members. We have a serious, supportive community that doesn’t exist in any other genre. If you’re a romance writer, and you’re not a member of RWA, what are you waiting for? You can find that support and sense of community in your national and local chapters of RWA. Come to our monthly meetings and see what you’re missing!

4 thoughts on “Film Review: Love Between the Covers”