This month we feature Regan Walker. She has a passion for history and writes sweeping romance stories in several different time periods.

Her latest novel, To Tame the Wind is out now.

You can find out more about her work at her website: ReganWalkerAuthor.com

Tell us a little about yourself! Who are you? What do you write?

I am a lawyer turned romance writer as of 2011. I write historical romance with real history and real historic figures as some of my characters. I like adventure along with love and so I have a fair amount of action in my stories. Thus far, I have published 5 novels and 3 novellas. A few of my stories are in anthologies, too. My stories span the eras from Medieval to Georgian (18th century) to the Regency era. Last year two of my books hit the #1 spot on Amazon’s lists of the Top 100 for their categories.

When did you first consider yourself a writer

2012 with the publication of my first novel, Racing with the Wind, book 1 in the Agents of the Crown series.

What does RWASD mean to you?

Lunch with my romance author friends in San Diego and speakers from whom I can learn something.

What is the biggest challenge you have faced on your journey to becoming a writer?

Finding the right path for me as an author. Initially I went with a small publisher but once the self-publishing path opened up, I quickly found it was the right one for me. I have never had an agent and I suspect unless I end up wanting a NY publisher, I may not have an agent.

What draws you to historical romance?

I love diving into the past, researching the tidbits that make my stories seem more real, more believable, and building a world that might have actually been. For each of my novels I’ve done hundreds of hours of research.

What do you look for in a historical hero?

I like a hero who is smart and knows what he wants and doesn’t mind bending the rules to get it. Typically that would be the heroine, but it could also be a secret document, a pirate’s treasure, a ship, a horse or any number of things. Preferably, he will be tall, dark and handsome, but my latest hero, Capt. Simon Powell, is a blond.

Probably it would be the Ursuline convent in Saint-Denis in Paris. That is where To Tame the Wind begins.

If you could travel to a specific time period and place in one of your books, what and where would it be?

It would probably be Scotland in the deep past. I’m going there in some future books I have planned. It was the reason I traveled to the Western Highlands in September of last year.

If you could go back 20 years ago, what advice would you give yourself?

Though I had a great career in law, I would advise myself not to go that route again. Instead, I would have gotten a PhD in history, probably the history of Scotland, Ireland and England, taught at the university level and written romance on the side—much earlier in my life.

Tell us about your latest novel! 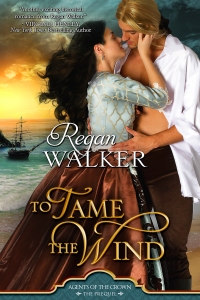 After writing my Agents of the Crown trilogy and some Regencies that go with it, I decided a prequel was in order. The result was a seafaring romance set in London, Paris and the waters of the English Channel in the last year of the American Revolution. Spies, privateers and politicians abound. The “blurb” kinda says it all:

Paris 1782…AN INNOCENT IS TAKEN

All Claire Donet knew was the world inside the convent walls in Saint-Denis. She had no idea her beloved papa was a pirate. But when he seized Simon Powell’s schooner, the English privateer decided to take the one thing his enemy held most dear… her.

A BATTLE IS JOINED The waters between France and England roil with the clashes of Claire’s father and her captor as the last year of the American Revolution rages on the sea, spies lurk in Paris and Claire’s passion for the English captain rises.

NY Times Bestselling author Shirlee Busbee described it as “A sea adventure like no other, a riveting romance!”

Before you go, any advice to give to the new writers out there?

Just finish the book. Then get some eyes on it—people who are not your best friends but who know good romance and can give you some good advice. Not just a critique (though that is helpful), but the “big picture” advice about the story itself. Also, I’d plan ahead and keep a list of characters, etc. I wrote my first novel without doing any of that and now I must rely on my memory for a lot of it. Of course, I could go back and do all that but I’m not that compulsive. I am not a plotter either. But at least I now keep track of my characters and research as I go, keeping a record of it all.