In the morning, Susan Meissner delivered an informative lecture on “Outlining by the Seat of Your Pants” – a method for planning your stories which blends creative discovery with the traditional three-act structure. After lunch, we partook in a little “Speed Dating” with our fellow RWA chapter members, bouncing around between tables and listening to the sage wisdom of some of the more experienced, published authors in our group. They gladly shared their knowledge on various topics, such as character development, cover art, and time management.

As always, we handed out our monthly awards. 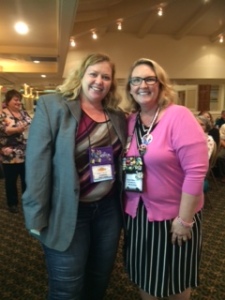 And there was plenty of Good News to share!

Every meeting is an opportunity for growth, recognition, and networking – not to mention, fun. Join RWA today and attend our monthly meetings!